Time to Change the World!

VoteFront is the first online democracy platform where all the people can vote directly on all the issues that concern them.

VoteFront is the new democracy system of the modern technological age.

Democracy emerged in Ancient Greece where all citizens had the right to vote and that's how they took decisions about their society. Today our world works with something that scholars dub representative democracy. Most of you are quite familiar with it - you vote for somebody else who then represents your interests in the governing bodies and takes decisions for you and your future. But do politicians really make their decisions based on the desires of the electorate?

In the modern world we can make a difference. Today we have technology and the world is more connected than ever. In most of the democratic countries, nearly the whole population has access to the Internet and that allows everybody to vote directly and to be a part of a true democracy.

VoteFront is the first online democracy platform where all the people can vote directly on the issues that concern them.

One of the first things you ever learn about democracy is that the people are the sole sovereign in such a system. Unfortunately, that's not the reality today. The purpose of our project is to give more power in the hands of the people and tо show the politicians what they really desire.

VoteFront is simple - people post issues on the platform that they think are vital for their region, nation or the world. After that all other people vote and express their opinion on the matter. If the issue is very important to them they can share it and invite others to participate in the voting. 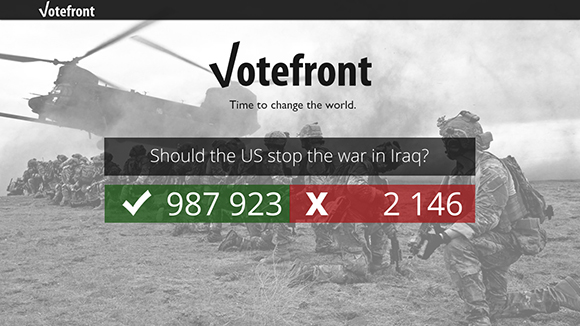 The person who posts the voting issue can restrict who is able to vote on it. For example, if the issue concerns only the United Kingdom, people from other nationalities are not able to see it or vote for it. That's how VoteFront works on a local scale. The only voting issues that are visible for everybody are those that concerns us globally. 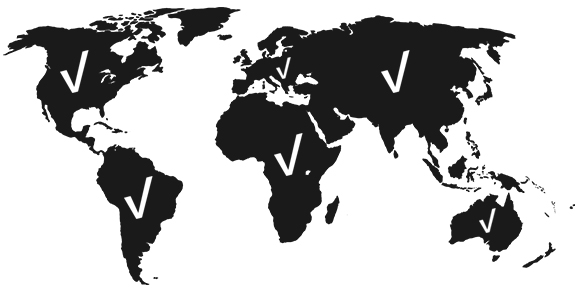 Except everything else VoteFront introduces something else that at this point doesn't exist in a way that can work - Global Democracy.
Our platform allows people from all over the world, with no regard to their nationality, race or religion to vote on issues that concern the whole planet. 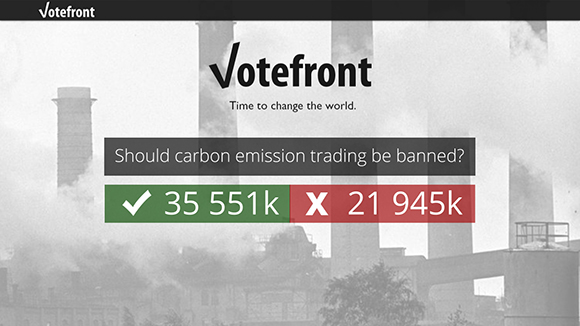 In that way VoteFront allows us to fully express desire on issues that are currently unsolvable by the international organizations which don't have a practical authority over them. Such issues could be the carbon emission trading, usage of nuclear power, fracking and everything else you can think that needs to be globally discussed.

We are fully aware of the security concerns about VoteFront. That's why are developing a first of it's kind three stage security system to ensure that all votes are real and they count. Our main goal is to be transparent at all times and to reflect accurately the desires of society.
X